Getting creative this Clearing

With the 2014 Clearing process well under way, four days in and dozens of universities are fiercely engaged in a last-ditch effort to fill their undergraduate student recruitment targets. This year has seen a record number of university places – expected to exceed half a million – with an extra 30,000 allocated by the Government on top of the unlimited available for the highest achieving students as part of the run up to the cap being removed entirely in 2015. Almost 400,000 students accepted places on A-level results day – up by 11,000 in a year, with 352,590 of these (an increase of 2%) securing their first choice of course.


The slight fall in A* and A grades and a reduced pass rate – for the first time in over 30 years – has meant that the brightest students now find themselves in a ‘buyer’s market’ with greater potential to trade up. The Universities and Colleges Admissions Service (UCAS) has revealed that the number of undergraduates admitted to selective universities has increased by 4% this year compared with just 1% for those institutions with the lowest entry requirements. Again, we have seen Russell Group universities advertising places through Clearing – with 17 out of 24 promoting vacancies more than 24 hours after the publication of A-level results.


When the dust settled in 2013, figures showed that in the two years since higher fees were introduced some English universities had increased their student intake by up to 40%, while a number of post-92 institutions had lost more than 20% of their entrants. With such increased competition and pressure to hit targets, it is little wonder that marketers go ‘all out’ during Clearing; it’s traditionally become a time of year when we see the greatest innovation and creativity. So, which universities and what activities have made an impression on this seasoned Clearing aficionado in 2014?


Personalisation
One of the first marketers to extol the virtues of personalised videos, launching the UK’s first ever at Birmingham City University (see http://upgrade-your-future.bcu.ac.uk/ if you’re interested), I’ve long been a fan of personalisation. Extremely popular to the extent it has become common place in the United States, it has yet to really take off creatively in the UK. For me, two universities in particular came up with innovative ways to make the experience for students getting a place that little bit more special.


University of Birmingham: The University used personalisation to its advantage during Clearing, sending students whose places had been confirmed a light-hearted personalised video welcoming them to the University. While the personalisation was relatively simplistic – essentially featured in two areas – it proved highly effective, both surprising and pleasing those who received it and generating lots of positive comments on social media and 142 likes on the Facebook announcement. You can see the video at http://www.myvideo.bham.ac.uk/?id=your-name 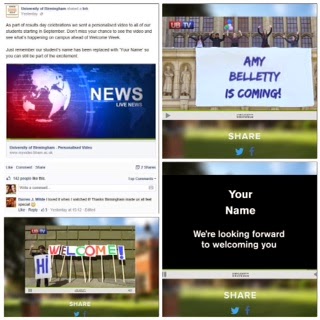 University of Sheffield: The University came up with a unique Clearing campaign advising students with exceptional grades to go ‘1 better’ and trade up. The messaging capitalised on the fact the University has been voted number 1 for student experience – with the best Students’ Union – for three years in a row. After results day, students given a place were sent personalised graphics and e-cards which celebrated their exam results and incorporated the underlying theme of success. There were lots of happy messages from their recipients! 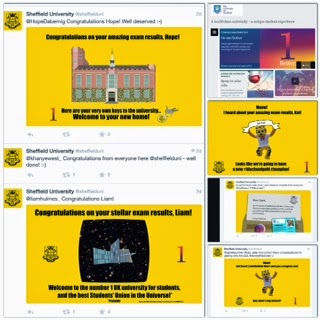 Student engagement
Persuading prospective and current students to engage on social media is notoriously difficult. Most universities now encourage prospective and current students to take selfies (or take photographs of students themselves) and post them on twitter and facebook feeds, usually with very little success. The most innovative approaches I have seen this year, which have bucked the trend and produced dozens of self-taken photographs and/or lots of retweets, shares and likes, come from:


Loughborough University: The #IAMIN campaign saw the University sending new students a cut-out polaroid-style frame to take their own selfies. Hugely popular, the University not only posted the selfies as they were submitted, but also created video tours of the selfies published each day too. 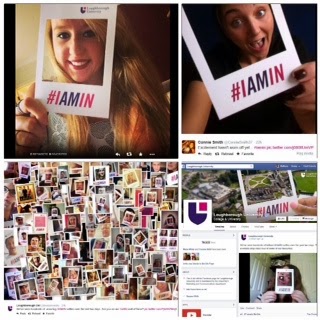 University of Salford: With a lovely play on words, the University encouraged everyone to send in their #Salfie with even the Vice-Chancellor getting in on the act. 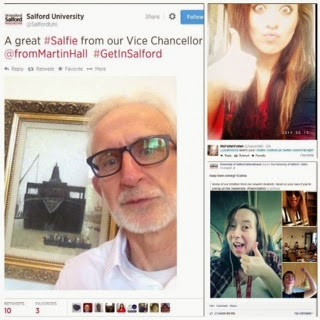 University of Roehampton: The University’s #IamUR campaign has been running all year and features case studies of current students and alumni (which seem to have sadly dried up before results day), but prospective students have cottoned on to using the hashtag when celebrating their places. 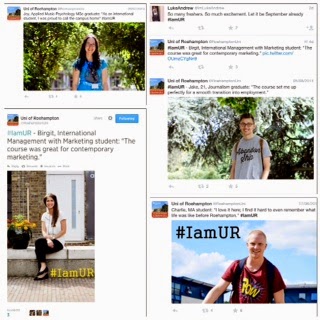 Information and guidance
When it comes to Clearing Guides, it takes a lot to impress me… I was responsible for producing one of the first in the sector way back when at the University of Wolverhampton in 1998! Nowadays, I don’t think there is a single university out there that hasn’t produced its own ‘Guide to Clearing’, though some are undoubtedly better than others. When it comes to information and guidance, however, two universities impressed me:


Middlesex University: The University’s video ‘Guide to handling parents’ was well produced, with a clear and concise script, great graphics and superb corporate branding. This video provided a new take on the issues of support for prospective students during Clearing and was a source of rich content retweeted by many sources and quoted in news articles. The University is rapidly establishing itself as the leader when it comes to information – it has produced multiple infographics on topics such as Clearing, graduation or student finance, while the You Tube channel boasts a range of impressive videos on subjects from ‘Writing a personal statement’ to ‘How to apply for a UK visa’, all in the distinctive red, white and black corporate colours. 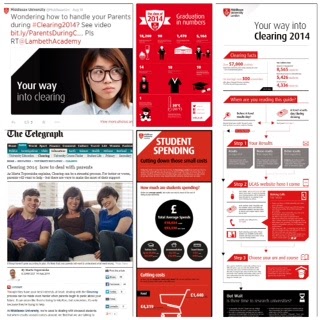 Teesside University: The overall simplicity and the consistent branding of the University’s ‘Clearing made simple’ campaign, integrated across all digital platforms, set it apart for me. On the main website, navigation is extremely easy, with lots of links to advice, information and visiting opportunities. What really impressed me though was the freshers’guide, which was being promoted widely as the next step for confirmed students. It wasn’t radical in terms of content, though there is a nice video to inspire freshers about what’s in store for them, but it was comprehensive, pulling all of the relevant information together in a simple way. What could have been cluttered, instead looks professional and clean with the use of an underlying table structure, iconography and corporate colours. 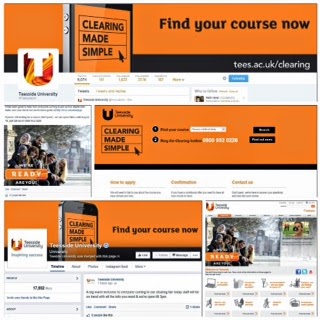 Current students as ambassadors
Anyone who currently or has worked in Higher Education understands the power of using current students. Often a University’s best ambassadors, it is current students who prospective students really want to speak to when getting a feel for what a particular course or university is really like. For this reason, universities have for many years recruited students to work as ambassadors at Open Days and other events, but this year’s Clearing has seen much more student activity than ever before. The universities who (to me) nailed it were: 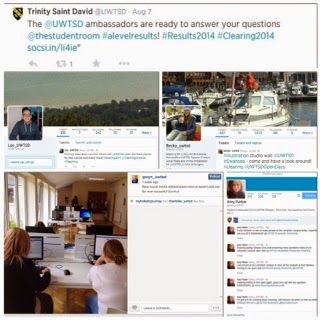 Birmingham City University: As well as recruiting students to answer Clearing queries out of hours on social media, the University also produced a range of videos featuring prospective and current students on what it’s like to study, attending an Open Day and a video made by students for students going through Clearing (https://www.youtube.com/watch?v=X0vPBNqsdTY) 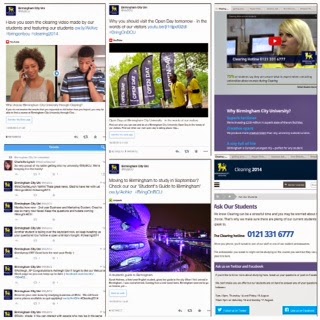 Outstanding customer service
Over the last three years, as student recruitment has gotten tougher, we have seen an increase in the opening hours of Clearing hotlines and the frequency of dedicated Clearing Open Days. However, two universities – Teesside University and Southampton Solent University – have taken customer service to a whole new level, becoming what I think are the only institutions in the UK to offer a 24 hour Clearing hotline. And there was no missing Southampton Solent’s telephone number! 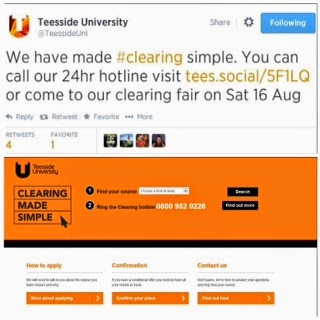 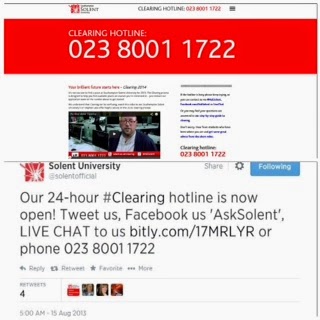 Distinctive positioning
In a buyer’s market, it is important to get across your key messages and clearly tell prospective students why they should choose you over and above your competitors. There were lots of tweets pushing news stories and star academics, but some universities made a concerted effort to convey a range of influential facts and figures. Those that caught my eye included:


University of Surrey: Key facts and figures formed an integral part of Surrey’s clearing promotion with a range of performance indicators around league table positioning, excellence and student satisfaction incorporated into the design of the website and promoted on social media. 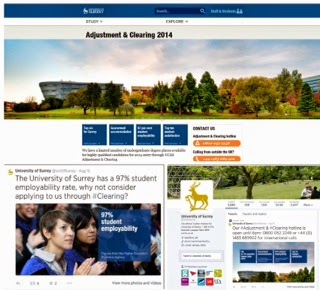 University of Bradford: From promoting the latest student satisfaction and employability ratings to the fact they have the largest pharmacy school in the UK and an award-winning campus, the University – and some of its Faculty accounts – presented a united front and has consistently pushed content related to its accomplishments throughout the course of Clearing so far. 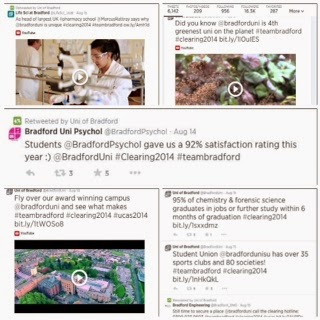 University of East Anglia: I love East Anglia’s ‘Wish you were here’ postcard pictures as part of their #experienceUEA campaign.  These pictures promoted on Twitter and Facebook showcased what is clearly a picturesque campus as well as a range of unique selling points. 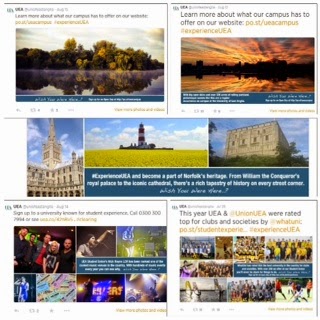 TV advertising
Television advertising is very expensive (you need to budget roughly £40K for production and at least £150K media costs for three to four-week medium weighted campaign), which is probably why it remains rare within the Higher Education sector. As someone who has developed almost a dozen TV adverts for three different universities, however, I still find it a surprise that people haven’t yet cottoned on to its effectiveness. TV has by far the greatest reach with the potential to be seen multiple times by millions and has the best recall for advertising, so it is actually one of the best mediums to generate action and can rapidly transform public perceptions. A 2014 study by Millward Brown found that despite having the highest penetration of smartphones across 30 countries studied for receptiveness to screen advertising, the British spend more time watching television than any other country – spending on average two and a half hours, or 36% of their screen time.

I only came across one TV advert in Clearing, which may in part be due to my home base, from De Montfort University. With its clips of inspiring imagery, challenging messaging and the crescendo of music and narrative, the advert to me was reminiscent of BCU’s Shaping the World TV advert (see https://www.youtube.com/watch?v=vlgLg3bSBJY) launched last October. But where I thought DMU really made the campaign their own was in the background story which sat behind the content of the TV ad, which was explained on the website and promoted through social media (check out http://www.dmu.ac.uk/study/how-we-told-the-dmu-story-in-30-seconds.aspx) From this, it became apparent just how much thought had gone in to every single image, many of which featured the University itself – from the circuit board representing DMU’s unique  Cyber Security Centre  to the  Faculty of Health and Life Sciences’ state-of-the-art electron microscope, which provided one example of the cutting-edge technology available for students. The advert has already generated lots of very positive comments on social media. 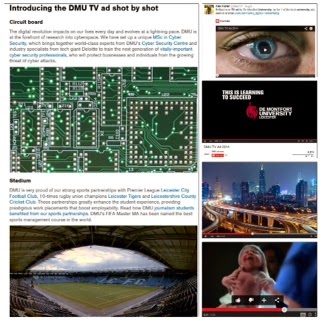 When all is said and done, the innovation in Higher Education marketing never fails to impress me and I’m certain there will be more that I’ve yet to come across. If you are doing something that little bit different, please let me know…there’s still time to make it into my Creative Clearing Top 10!
Posted by Kathryn Jones at 02:33

Kathryn Jones
Former journalist with over 20 years of experience in PR, communications and marketing. Now a senior marketing consultant for The Honest Marketer, specialising in Higher Education, supporting universities and colleges. Blogs now on website www.thehonestmarketer.uk